Save £55 on your first visit with us
Book now

The power of two – Gary Burgess

I’m a creature of habit. There. Said it. I go for the same walks to the same places, choose the same spots for a coffee or brunch with a friend, and on a rare evening out it’s safe to say it’ll be one of my usual haunts for dinner. There’s nothing wrong with any of that, but it’s a safe bet that I’m missing out on new experiences.

And so to Human Health where, for the past three or four years I’ve been a functional human being able to make more of daily life thanks to my regular appointments with Tom. That man is a genius. His warmth, his wit, his wisdom, and his intuition all guide his chiropractic work in a way which means I leave in better shape than I arrived every single time.

But I’ve been missing a trick by only experiencing one ‘flavour’ of chiropractic.

Since the arrival of Tacy, I’ve been mixing up my appointments a little more. Initially it was simply a way to get appointments at a time that suited me better, but I now realise doing so has such huge benefits. I have no intention of playing off Tom and Tacy, or saying one is better than the other. What I am saying is that they each bring their own unique approach to their consultations and I am now getting the best of both worlds.

It’s actually quite difficult to explain in words quite why it makes a difference to me, but I just know it does.

It feels like I am tapping into two people’s experience instead of just one, and that I am the winner in that process.

So, I’m not urging sudden infidelity in the face of your favoured chiropractor. But what I am saying is that mixing it up may well work for you.

And, if you’ve not yet met Tacy, it’s a chance to get to know another brilliant addition to the brilliant Human Health team. 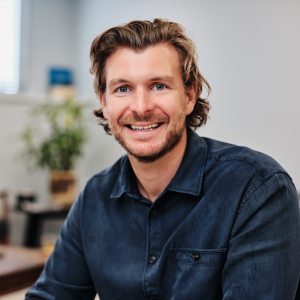 With ten years of experience working as a chiropractor in Jersey, Tom has a passion for helping our island to discover true health and vitality.
All Posts

We are open Monday to Friday. Appointments are available between 7am - 7pm

We are registered with the United Chiropractic Association